In Freedom’s Cause {A Schoolhouse Crew Review}

At Heirloom Audio Productions they are passionate about bringing real history to life.  They are the kind of company that does their own research and travels to the actual places their audio dramas are about. They make it a priority to not take the past for granted.  Their mission is to engage  their listener's imagination by taking them back in time and immersing them in the story  That tells you how neat and engaging they strive to make history.

The first time I heard about In Freedom’s Cause was when I was listening to a homeschool podcast and they had interviewed Bill Heid, Executive Producer of Heirloom Audio.

I was ecstatic when I saw it up for review.  I had wanted it for my family so much!

I received the In Freedom's Cause Single Package $29.97, which included.

30 pages of discussion questions and key points along with links to websites that pertain to the story.  This is a real goldmine of information and can be an exciting way to dig deeper into William Wallace and King Robert the Bruce.

This contains all the music used on the audio drama.  The music is by Emmy Award winning composer John Campbell.  The music is so great and is nice background music

Printable copy of The Prayer Of William Wallace. (Digital Download)

A poster style printable copy of the Psalm poem.

We were able to listen to this in one car trip.  We did listen to it twice since we have gotten it.  The first time we listened to it straight thru.  The second time we broke it up over many 20-30 minute car trips.  The breaking it up into multiple trips made it easier for us to use the study guide.  I was able to use the discussion points in the study guide to start conversations about In Freedom’s Cause.

We are an audio book loving family.  We travel quite a bit.  We were able to listen to this audio drama in the car.

The difference for us between audio books and this audio drama is the fact that we did feel immersed into it.  The sound effects, the music, the different voices of the characters.  It felt much more entertaining than if it was just one person reading it with no sound effects or anything.

In Freedom’s Cause is suggested for ages 6-adult.  I had my 5 year old in the car with us while we were listening and while it may have not held his complete attention, he did enjoy it.  There is some killing in it, therefore some scary scenes.  That is history, so it didn’t bother us.  In my opinion it wasn’t described too gruesomely.

Find In Freedom’s Cause on social media:

To see what others think of this check out this post. To see a wide variety of reviews check out the crew blog.

Wake up and do my SAVERS (as best I can).  I am not perfect with these yet.  They are from a book I read called The Miracle Morning.  Doing these things have literally changed my life.

Next I get kids up and either take them to classes or we eat breakfast.  Something simple like cereal or oatmeal.

After breakfast we start our at home schoolwork.  The older kids pretty much go on their own and I see them again at lunch time where we must eat lunch together and talk about what we are learning.  I work with the younger kids on their schoolwork.  I can get through everything with my Kinder in 1-1 1/2 hours.  Plus he usually watches an educational show like Magic School Bus or Where is Carmen Sandiego?  He also loves Wild Kratts.  My 4th grader does much of her work independently with some direction from me. She can get through everything in 3-4 hours a day, then she like to play Minecraft or do art projects.

We all gather to eat lunch.  After lunch, I go for a run if I didn’t do one in the morning, or I go to the Archery class I teach, depending on the day.  My kids sometimes have activities like piano, archery, co-op classes, and my 14 year old also babysits sometimes and cleans a ladies house once a week.

We have a very set dinner time rule.  Dinner must be served between 6 and 7pm.  We rotate who cooks.  They get to choose their meal to cook and give me the ingredient list.  They must begin preparing dinner in time for it to be done during dinner hour.

After dinner, we do a family clean, where everyone has to clean up everything.  Sometimes I have a list, sometimes I just say look around and clean something.

Then we start showers and I also work a night job, so I go to that sometimes.

Then we do bedtime and whew!

There you have a glimpse into our routines.  Every day is different though.  Meal times are our big scheduled thing and we work around those.  It keeps us all on track.

You can search any of the highlighted words in my Amazon affiliate search bar.

And I thank you!

Do you mean besides curriculum?  Because seriously I have a problem there. Seriously.

I actually don’t collect anything.  I used to collect elephants and still have quite a few figurines and I have a nice elephant picture. I began collecting those about 16 or 17 years ago.  I haven’t gotten any new ones in about the last 12-13 years.

I am beginning a shot glass collection.  Those are easy enough to find.  We only have about 6 of them so far.

What do you collect?

I want to run a half-marathon this year.  I am currently running just over 2 miles a day.  (In about 30 minutes.)  I am working my way up.  I figure I can run 3 miles by the beginning of March and keep adding up about 2 miles a month from there.  So in 6 months, I should be at the 13.1 miles needed to run a half.

As far as actual things, right now I want some new running clothes.  I have already bought them, but I am making myself earn them.  I get my pants at 3 miles and a sports bra at 4 miles, and a shirt at 5 miles.

I would also like a bigger place to live.  I am currently living in a 3 bedroom 3 bathroom duplex.  I am ready to go back to a house.  I love my neighbors enough, but I just want more space.

I also want my husband home more.  I miss him. I still want him to have job stability and work/make enough to support us comfortably, but I just wish he was home more.

A few of my favorite things….

My very favorite-est of favorites is YNAB.  Also known as You Need A Budget.  It is the most practical budgeting software out there.  I didn’t really know what a budget is until I got YNAB.  We have owned it for over a year a year and it is well worth the $60 one time cost.  They also offer a free 34 day trial.  Try it!  Then if you want to buy it, I have a coupon code to save $6.  http://ynab.refr.cc/2VSRXHM.

My next favorite thing is a book.  It is called The Miracle Morning by Hal Elrod.  I read this book only about a month or so ago, but my life has had many positive changes since then, and it is directly related to me creating it with my morning routine.

I love my Fit Bit One.  Many of my friends have some type of Fit Bit and we all do competitions daily and weekly.  It really motivates me.  Between this and The Miracle Morning Book, I have began running.  My goal is to run a half marathon this year. (2015).  Since starting running I now realize why people run.  It is so relaxing.  I feel a sense of accomplishment.  I get that alone time to think.

I wasn’t a morning person or a runner and now I am both!

Come take a tour of… 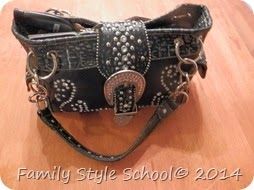 I know it’s weird, but here we go. 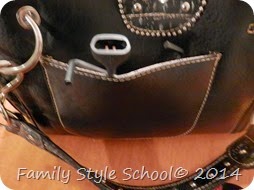 On the outside pocket I keep my Fit Bit Charger and 2 hex wrenches.  I teach an archery class 2-4 times a week, so I am always adjusting bow draw weights with the wrenches.

On the inside, I keep my wallet, 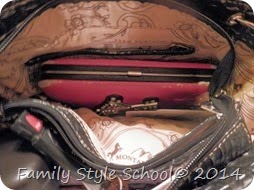 And a bunch of junk. 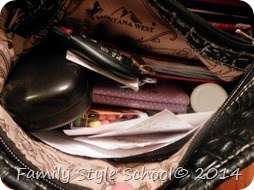 Here is everything all out. 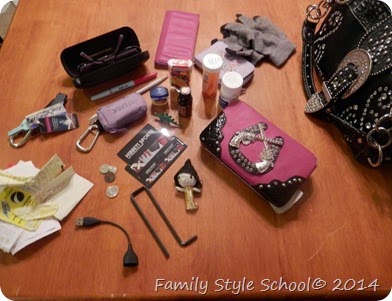 There you have it, a tour of my purse.

If I won a million dollars….

Seriously!  If I won a million dollars I would do a few things.

Here would be my main budget.

The rest would sit in a retirement savings account.

It’s just how it is.