We load up the car, all things carefully packed and in a precise spot. 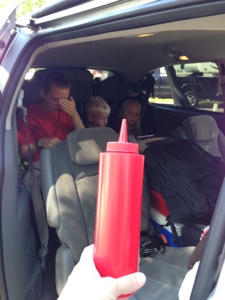 We load in, our car full to capacity.

We get about halfway through our 10 hour drive.  We are enjoying the scenery as we travel through the middle of Utah on a Sunday.

The 4 year old suddenly has to pee and he means NOW!

We do what any respectable family would do and pull off the side of the highway.  I unbuckle him and he does what he has to.  I hear a bug making a funny noise.  Then suddenly it hits me right upside the head.....

The tire is going flat and fast!

Yay for us, I have a tire emergency repair kit, in the stow and go......... beneath some luggage and a cooler and the kids feet and.....well you get the idea.

So as I feverishly work toward uncovering the repair kit as the weight of all our stuff and our bodies are deflating the tire, and, I mean FAST.

I finally uncover it.

My husband and brother, who was along for the adventure began to work as a team plugging the hole.

One plug in and we're golden or so we thought....  The tire is still leaking, we try a second plug and now we're golden.....

We head to the nearest gas station about 10 miles down the road.  We made it, full the tire up with air and...... 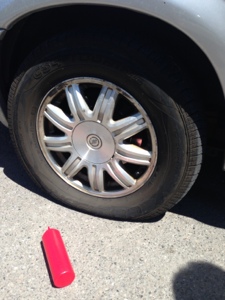 If you know my luck, you guessed it, still leaking.

We call a truck stop and ask them how much it would be to patch a leaky tire.  It was just a measly $320.00 dollars.  Which happens to be slightly out of my budget.  Not to mention more expensive than a BRAND NEW TIRE.  We even double checked that they realized we were not a semi.  They did.

We begin calling around other places.  No where was opened.  It was a Sunday afternoon.

My husband decided to go in the gas station and ask, they suggested a Walmart about 20 miles back.

Then they inform me that they can not patch a tire that has a plug in it.

We ask them to try since the plugs weren't holding anyways.  Actually it was more of a begging from my husband.  They say they will try. We get some lunch and wait. 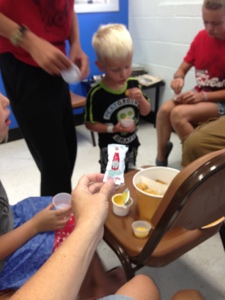 They call us up to the counter.  They were able to fix it!

We get on the road again and made it to the cabin!

After a trip like that we all have a fun family campfire complete with karaoke. 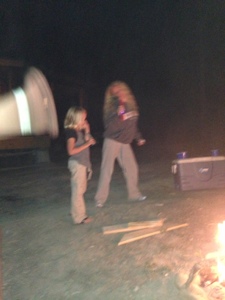 Stay tuned for part 2 of our adventure.

A few notes to justify our behavior:

The spare wouldn't have held the weight any better than the under inflated tire.

Walmart was only able to do the patch after the plug, because the hole on the tire was so big the plugs wouldn't hold.

My kid had to pee and he couldn't hold it.  Pulling over, running something over on the shoulder and all that we went through was better than my kid peeing his pants.  (At least that's what I keep telling myself).

Freaking out wouldn't have helped.

I was able to teach my kids to:
Relax, even though we just go a flat tire in the middle of nowhere on a Sunday with a car full of stuff and people, just relax while we figure it out.