On Monday afternoon Tyler had an appointment with an Orthopedic doctor.  The pediatrician just put a splint with a wrap on Tyler’s arm, and he most likely needed a plaster cast. 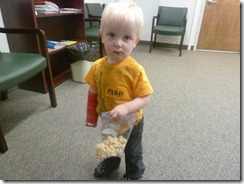 Waiting patiently for the doctor.

The doctor looked at his X-rays and determined that both his Ulna and Radius were broken and bowing out.  They are supposed to be lined up and his had a decent size gap in them. 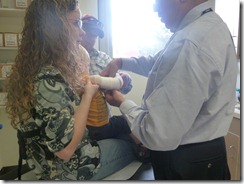 The doctor said they would not have to be reset as he is young enough that they would grow back normally 99% of the time.

He did put pressure on Tyler’s arm as he was wrapping it with the plaster cast material. 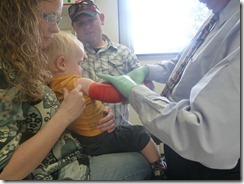 Then he sent us back over for X-rays.  These ones came back and showed that the bone is already healing and they were lining back up.

This cast goes up past his elbow, so his arm stays bent.  He does seem to be more comfortable using his arm in this cast.  He still favors his left arm for now.

Now we will go back every 2 weeks for a checkup and X-rays, I suspect. 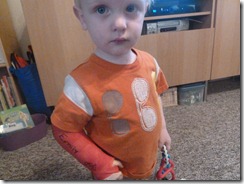 The kids signed his cast when we got home.  They all thought that was pretty cool.

This also opened up opportunities to talk about bones and which bones are where.  The doctor printed out Tyler’s X-rays for us to bring home and show Emily and Katey, since they did not go to the doctor with us.