Our church held a Pinewood Derby “anything goes”.  It didn’t matter what your car weighed or what it looked like, as long as it could fit the track.

Tommy had an old Pinewood Derby car, and we just bought another wedge shaped car and screwed it to the top of the old car.  We added extra screws all over for more weight as well as drilled holes in the back of the new car and added Pinewood Derby weights. 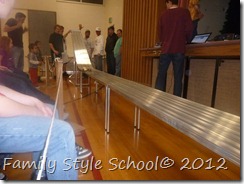 It was really neat.  It was double elimination style and Tommy won first place in the modified division.  (They also had a regular Pinewood Derby going on).  He was so proud.  He said to me, “Mom, that is pretty cool that I won and it took me less than an

hour to build the car!” 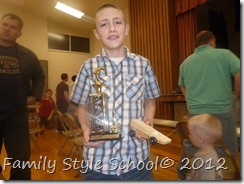 They had trophies made and everything.