Learn the Electoral College Hands On! {The Presidential Game- A review}

“The Most Powerful Game In The World”

The Presidential Game is a full on presidential race, using the Electoral College process, campaigning and fundraising.

The game is recommended for ages 11 and up.  (my 8 and 4 year old played, see about that below)

Number of players:  2 teams, one Republican and one Democratic.  The teams can be single player or multi player.

Spending time with The Presidential Game:

As you know my family loves games.  We play them all the time!

The first time I asked my kids to play this game they grumbled.   Keep reading, it gets better.

I knew they didn’t want to learn a new game.  They thought it was going to be so educational and not fun at all!

After quickly reading through the directions and explaining it to them as fast as I could, I talked them into playing it. 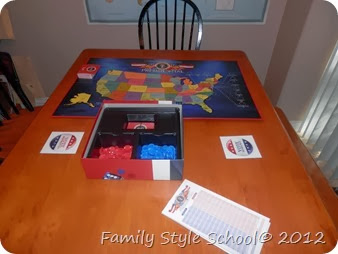 We set it up and picked teams, Republican or Democratic.

We began and just played and had fun.  The kids were learning all about the Electoral College hands on (don’t tell them that though).

We played it the way we I interpreted the directions.  We had fun.  The game took about 2 1/2 hours.

The next time we played, I refreshed myself with the directions, I quickly realized that we hadn’t completely understood them the first time.  I noted the changes with the kids and we played.  We had a ton of fun and the game went a little quicker. Okay, a lot quicker!  This time we played the entire game in just over an hour. 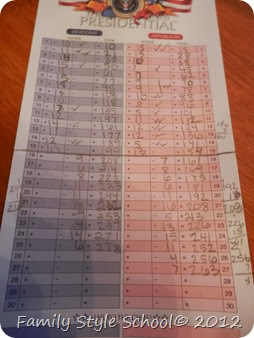 We played it again.  I refreshed myself with the rules.  We tweaked a few things that I think I didn’t understand the first few times.  This time we instead of using the paper score board we used the iPad app. (Also available on the computer).  This made the game even faster playing at just under an hour.

We played again and again.  Our favorite way to keep score is definitely the online webmap. This makes the gameplay faster and it is really neat to watch the states turn red and blue rather than just writing it on the scorecards. My younger kids were able to play on a team. I think as long as you have someone on the team over 11 years old, you can have younger kids on your teams.  I did not expect my younger kids to sit clear through a game.  My 4 year old came and went, checking on his team.   My 8 year old was able to sit through the entire game and actually chose too.  She took turns and discussed what to do with her team before making a decision. I appreciated the fact that my entire family could play.

This game is fun and educational.  The electoral college can be a hard thing to understand. This is a great way to learn it hands on.

I think that the directions could have been much more clear.  They can be interpreted many different ways.  Even with that we were able to figure out our way to play and it works! 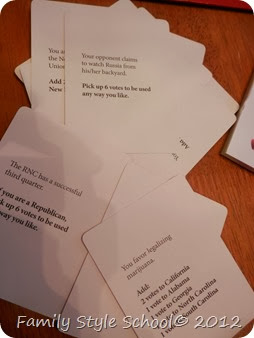 The Fundraising Cards have real life current issues on them.  Some of them bothered me.  Such as the one that says, “You favor legalizing marijuana.”  I solved this by removing them from the pile.  I think that it is important the kids know the real life issues going on within the election however my children are still young and impressionable, so I wasn’t quite ready for them to be in favor of things like this.

Don’t just take my word for it, see what other’s had to say!

To see a wide variety of reviews check out our crew blog.