Kindergarten is so fun!


I have chosen to do units based upon the Magic School Bus series.  I have also decided that for at least the first 5 weeks of school to include Katey (9) in the science studies with us.
I used this free resource as the basis of my plans.

We started Tyler’s 5K year off with an Ant Unit.
We read tons of Ant Books. 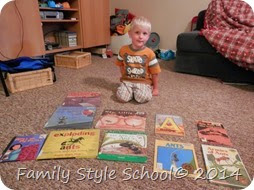 We read some fiction and some non fiction.  Hey Little Ant is a book we read about decisions.  We also did a persuasive writing assignment with this.  I wrote what Tyler dictated to me and Katey wrote her own.

We did an ant labeling page and Ant Can- Have- Are. Both of these were from Erica Bohrer’s Blog. She also has the Hey Little Ant writing page.

We decided to make our own ant farm.  I took a quart canning jar and put a pint canning jar with a lid on it inside the quart jar. I filled the edges with sand from my yard.  We then baited ants using some chips in our yard.  Then we picked up the chip and put it into the jar. We covered it with a coffee filter. Then we made a cover out of dark paper and covered the ant farm. 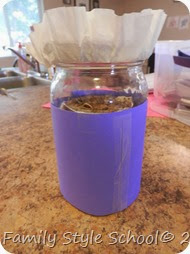 We waited until the next day to take the paper off. It was really neat to see all the tunnels and trails that the ants had made. 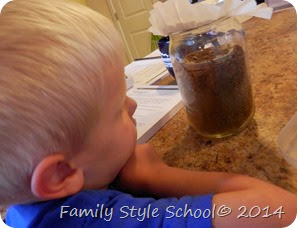 We read more ant books from our ant book pile and then we baked an ant cake.  We just used a box yellow cake mix and put chocolate sprinkles right into the cake batter. Then we baked it and frosted it. 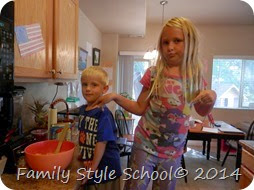 I actually had Katey read and follow the directions with my supervision. It worked out really well. 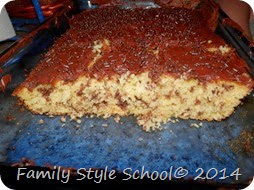 Here is what it looked like after we had cut into it.  It was so fun, and who doesn’t love cake.

Every day we read more and more books.  One morning we woke up and looked at the ant farm and their were ants everywhere! 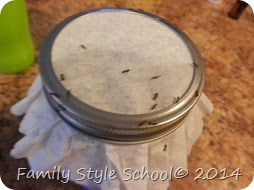 They had chewed right through the coffee filter.  We are considering it a memory. You know, “Remember the time the ants escaped the ant farm and were all over the bookshelf they were on.”  So after that if I ever do an ant farm again, I will order one. 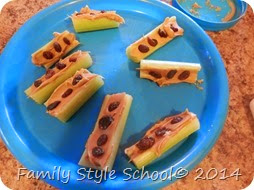 So of course then we made some ants on a log snacks. No one liked them.  We will not be making them again. 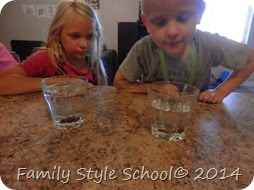 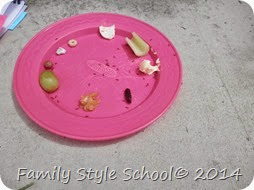 We also did an ant buffet.  We chose a variety of foods from around our house and put them in a circle on a plate. We all voted on which one we thought they would prefer.  We then baited some more ants (this time with our ant cake).  We then put the ants in the center of the plate and waited. We came back about 15 minutes later and the ants had all left the plate.  They climbed right off.  They didn’t take any of the food.  They just left.

We watched a youtube video on an ant hill excavation.


Many of the ideas can be found on my ant Pinterest Board.
Things we used in this ant unit.