This week we are getting into our school-year routine.   I have now realized how busy our Thursdays will be, so I decided to pre-make that meal, (shepherds pie).  As I was doing that I thought why don’t I just brown the hamburger for taco’s and sloppy joes (lunch one day) at the same time.  While my roast for dinner was in the crockpot, I was boiling potatoes for mashed potatoes for Sunday dinner as well as some to go on top of the shepherds pie, I browned 5lbs of hamburger and then began preparing the shepherds pie, divided and seasoned out the rest.  I already feel on top of this weeks dinners. 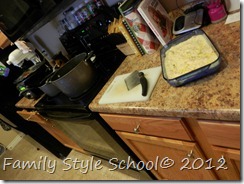 Thursday- Shepherds Pie- Premade-   I just use ground beef, a can of veggies and a can of soup.  Layer it and top it with mashed potatoes.  Bake at 350 for 45 min.

Friday-  Either Homemade Pizza or go out to eat.

What tips do you have to make dinner prep easier?  Any simple go-to recipes?

My go to quick meals include fajitas, spaghetti, and tacos. :)