My brother-in-law Matt has lost over 100 lbs since January of 2010!  That’s 7 months people.  (He had met his hundred pound mark the middle of July.  We had planned on having a 100 lb party for him at Texas Roadhouse.  (His favorite restaurant) It took us this long to be able to get everyone together. (out of town, working etc) 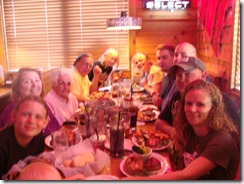 If you are wondering his secret I will tell you that it was NOT surgery!  It was plain old hard work, DIET AND EXCERSISE!  In the beginning he was going to the gym for about 15 minutes a day. That was all he could handle.   Now he is going about an hour each day.  The diet he is on is called Medifast.

Here is his "before" picture. 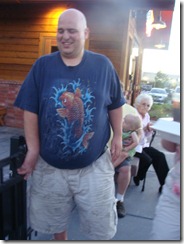 Here he is now.  He says he would still like to lose 100 more!  (How funny is it that he is wearing the same shirt.)

While we were at the restaurant it happen to be kids night.  They had some activities going on outside. 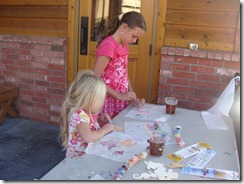 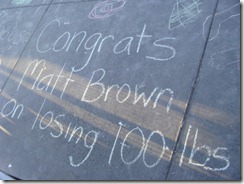 And I drew with chalk.

Matt, we are all so very proud of you!  We have seen all the hard work you have put into this, and all the sacrifices you have made!

While we were there we celebrated a birthday as well.  Paul’s Grandma turned 91!  She even got up on the saddle for us to give her a BIG BIRTHDAY YEE HAW! 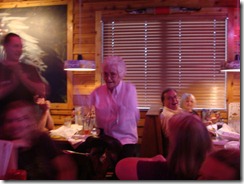 Happy Birthday Grandma Rita!
at 11:47 AM

Wow! 100 pounds! I wish I could do that. He looks great - what an accomplishment. Texas Roadhouse is a favorite with my family.