That’s right, we are learning what small town life is like here.  I have always been a supporter of community family events.  When I saw this on the bulletin at the grocery store I knew we just had to go. 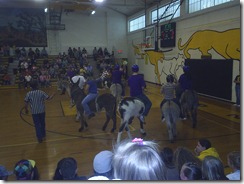 Yep, it’s exactly what you thought.  Basketball being played while on a donkey!

It was funny to watch.  One of the rules was that you had to hold onto the reins if you got off your donkey, which was funny.  Donkeys really are so stubborn!  The kids would try to pull them to reach the ball, and they wouldn’t move.  It seemed to me that the kids that stayed on their donkeys made better progress than those that got off. 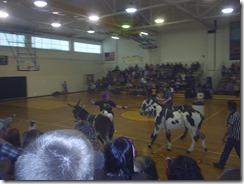 It was divided up by the local schools. 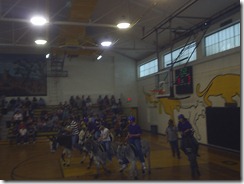 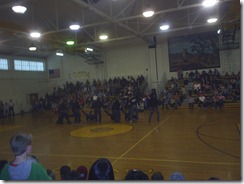 The half time show was the men’s drill team.  Which was really one of the teams put hoodies over their shirts and had a dance performance, which was hilarious!

This was so much fun.  Paul and I were thinking about not going.  We were just tired and just wanted to stay home, but boy are we glad we went.  The kids and us laughed the entire time!

The pictures don’t do the whole thing justice, so I took a quick video of it!
at 6:44 AM

Just Hysterical!!! Thanks for sharing.