Week 2 with the chickens has been interesting.  We are learning a lot about chickens each day.

We have to check them for pasting.  (which is what happens when their feces gets stuck to their bum).  I could not do it.  Paul had to check them, and wipe their little bums.  I still struggle with holding them.  They poop on you almost every time.  With that being said, everyone else in my family holds them just fine. 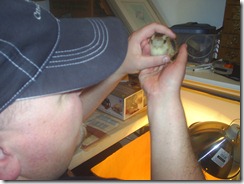 They do stink, they seemed to be outgrowing the box we had them in, so we moved them to a bigger tote, and added a perch.  We also had to go and get a bigger water container.  They kept tipping the smaller one over and getting the pine shavings all wet.  I think that made the smell worse.  We were having to change the pine shavings daily.  Also the water was having to be refilled twice daily.  That was not going to work for us.  We need to go out of town for a few days at a time occasionally.

We have also moved them out to the garage we are beginning to get them acclimated to the outside weather.  They do still have their heat lamp.  This also helped the stink not be in my house.  Which really wasn’t THAT BAD, but I could smell it.   Also Tyler kept reaching in and grabbing the perch and chasing the chickens with it. 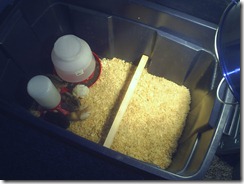 Now we still check on them often, and so far the water only needs to be filled about once a week.   They haven’t ran out of food yet.  We do have to clean out the bottom (red) part of the water container daily to every other day, because they kick pine shavings in it.  We also added rocks to the bottom of it, so they wouldn’t drown.

The coop we were going to get wasn’t what we wanted, and it needed some work.  We decided to buy some coop plans from My Pet Chicken.  My father in law is getting started on the building of it now.   Hopefully he will have it done some time in April and then they will move in to it, in our backyard.

We are counting down the months till we may get eggs.  We are thinking around July or August.

I'm glad to hear about your chicken experience. We have ordered about 20 chickens through the 4-H poultry chain and will be receiving them mid April. We are excited even with the thought of more work. Keep us updated ;)