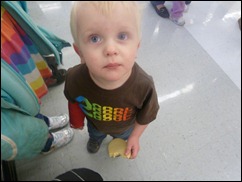 Waiting in line to see the Easter Bunny with the cookie he decorated.

Tyler broke his arm, and it breaks my heart to see him like this.

Don’t get me wrong he is adapting very well, in fact he didn’t even cry very much when it happened, but I just knew something was wrong.    I can’t help but think I wish I could have prevented it.  I should have been next to him the entire time, etc, etc, etc. 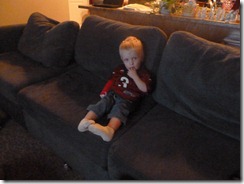 We had just gotten done eating lunch on Friday.  Tyler went upstairs to play.   He was up their for about 15 minutes while I was cleaning up lunch.  Emily had decided to go upstairs and get a book to read.  She saw Tyler coming down the stairs.  He was doing fine, so she continued to her room.  The next thing I heard Tyler scream and the thudding of him down the stairs.    I ran from the kitchen up the stairs as fast as I could.  I made it to the landing in the stairs about the same time as he did.  Everybody came running from their various places throughout the house to help him. 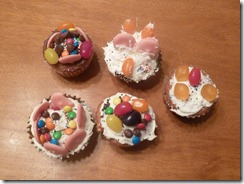 He decorated a cupcake with us. The one on the right.

I got him and hugged him.  I gave him a quick look over where I didn’t notice anything wrong.  I gave his arms and legs a quick check as well.  I began holding him sitting on the couch, and checking for a concussion.  He did not have one.  He continued to cry for about 10 minutes.  He is not usually this inconsolable.  I also noticed he kept on grabbing his right arm.  I decided to call the doctor and let them know I was coming and that I wanted him checked out. 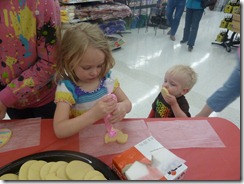 We got to the doctors office about 10 minutes after I called. (that’s the beauty of a small town, everything is so close)   They took us right back and the doctor came in and looked at him.  We decided it would be best to do X-rays.  We went over to the hospital and got them.  When we got back to the doctors office they took us right back to a different room, one with a computer for viewing x-rays and all the casting stuff. 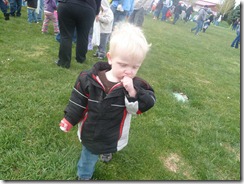 We  viewed the x-rays with the doctor and there is a clean brake right though his Ulna, the shorter bone in your arm.  We are very lucky that the bone did NOT get displaced, so it does not have to be reset.  They put a quick temporary cast on him made out of Ortho glass and some wrap.  He will wear this cast until we go see an orthopedic specialist on Monday.

He occasionally comes to me and holds his arm out and says owie.  I give him pain medicine when he says that.  He still cannot put any pressure or hold anything heavy with his right arm. 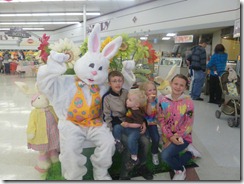 I feel terrible that this happened to him, and blessed that it is not worse.

Stay tuned for what the Orthopedic says.

The pictures spread though out this post are all things that he has done since getting the cast.

Poor little guy. I hope he heals up soon.

Poor little guy. My youngest broke her arm when she was about a year and a half old -- barely slowed her down. Her orthopedic surgeon told me that parents can often prevent the big falls, but most often he sees injuries (even severe ones) caused by the little falls, the ones that can't be prevented.