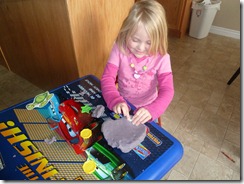 I am trying to teach Katey about money, just the basics right now.  A Penny is worth 1 cent, Nickel, 5 cents, etc.  I tried just flashcard style.  Holding one up, telling her, then seeing if she would remember.  That wasn’t really working.

We also have the make the date with money on our morning board.  That works better.

We tried some interactive activities this week. 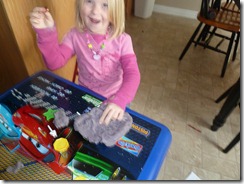 I hid some change in some playdoh I made.  As she would uncover them, she had to tell me what each one was, and then we would count them up together.

She really thought that this was so neat.  She really loved this game.  Then she hid them for me to dig.  It was alot of fun. 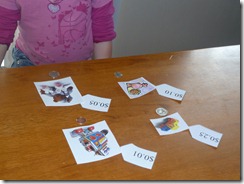 A little later in the day, I showed her this game that I had made.  (It is my first shot at making my own printables)

It’s basically 4 pictures and 4 price tags.  She had to price each item, then show the coin that would buy it.

Sometimes I would switch up the prices and sometimes she would. 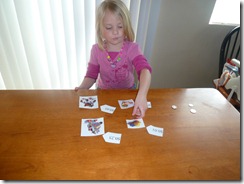 It’s such an eye opener for me to see how much different she learns in different environments.  She caught on so quickly with these simple games, whereas she was struggling with just talking about them.

I have also realized that homeschooling doesn’t have to be over the top.  Just simple time with your children is all it really takes.

Email ThisBlogThis!Share to TwitterShare to FacebookShare to Pinterest
Labels: Family School, Why I homeschool.