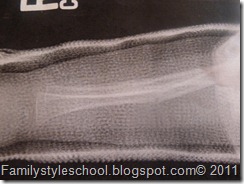 On Monday I took Tyler back to the doctor.  It has been 3 weeks and for some reason I thought I heard the doctor mention that it would be getting his cast off at this appointment.  I remember thinking that sounds strange, I thought casts stayed on for 6 weeks.

They took some more x-rays of his arm and you can still see the break in it.  This is after 3 weeks.  So we have at least 3 more weeks of a cast.

Sometimes he walks up to me holding her arm up and saying “off, off, off”, it is so sad!

Other than when he begs for me to take it off, he is really doing quite well.  It doesn’t slow him down very much.  In fact sometimes I think he is just more dangerous with the cast on.  The other day he was jumping off the couch, and today he was climbing on some toys and fell off, I think if he didn’t have a cast on he would have broke his arm again.

He is definitely my dangerous child.  I am sure he gets that from Daddy!